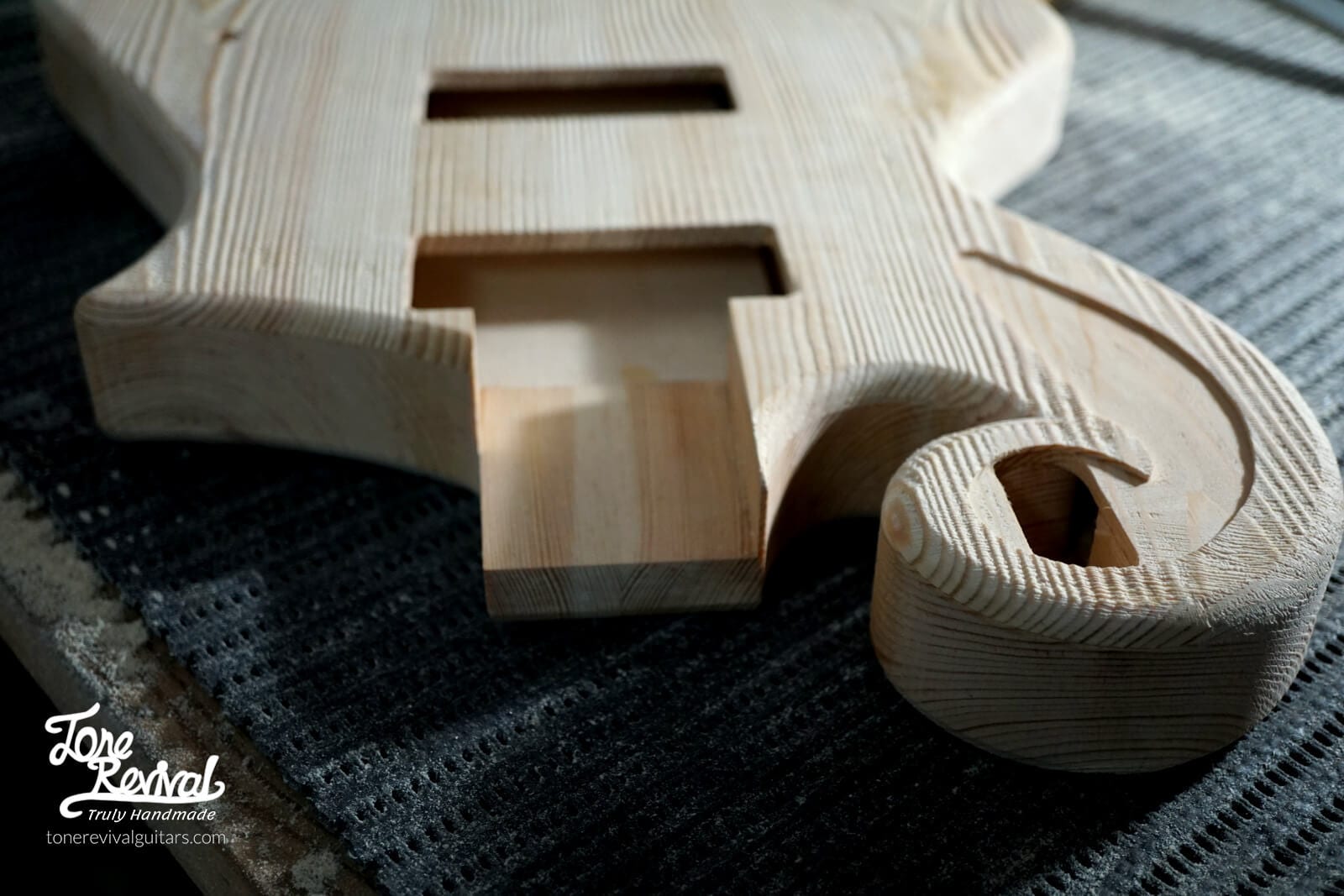 Some Thoughts about Pine electric Guitars

Pine electric guitars are, in our humble opinion, some of the best sounding instruments on the planet. Especially if one uses, it’s tonal characteristics in a chambered or semi-hollow body.

My fascination with this not-so-common tonewood started years ago, after when as a child I was watching, once again, Jimmy Page with his 59 Les Paul, squeezing wild wails effortlessly while roaming on the stage in a Led Zeppelin show from the early 70’s. The skinny guitarist lifted the guitar with extravagant acrobatics and gestures for almost two hours. I suppose that like many guitarists, as a result, I became obsessed with wanting a Les Paul, so a few years later I got myself a79 Les Paul custom – a black beauty. It sounded great, but it weighed a ton, and over the next few years I wondered how the young and skinny page used it as his main axe for decades.

It was only when I Held an accurate 59′ Les Paul replica that I came to realize that there was a huge difference between the original lightweight Honduran  Mahogany and the Sapele heavyweight lumber that was used as a substitute later on. 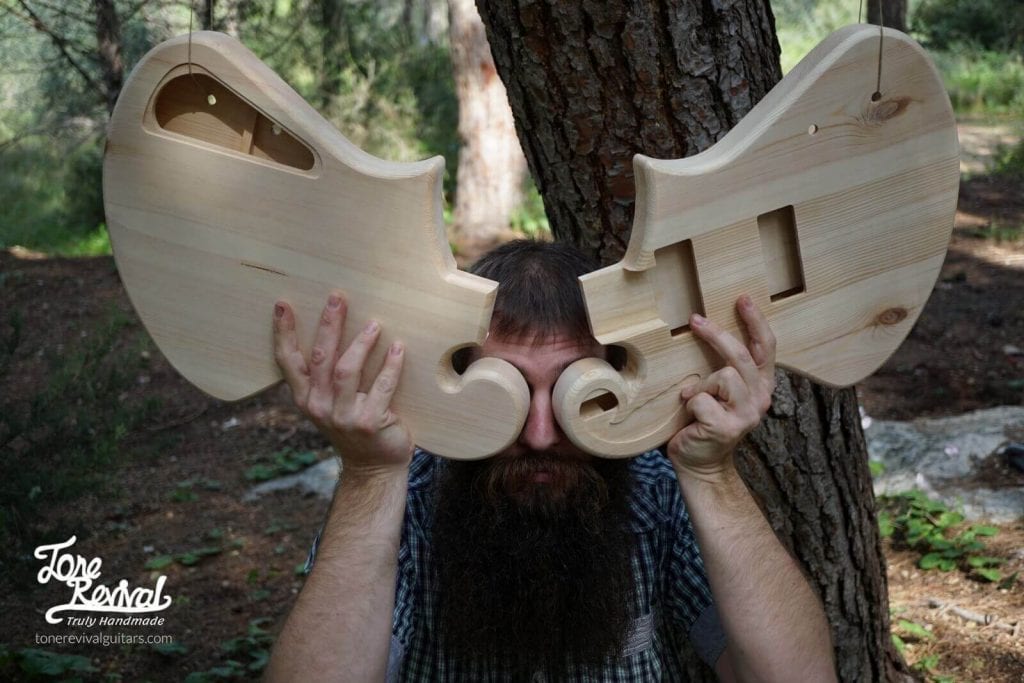 That was the moment I became interested in lightweight lumber as a tone wood. Eventually, when I built an electric guitar for myself (the now modern classic, little Sister), I found a contact in Honduras and imported some certificated lumber. But two years later it became part of the CITES treaty’s appendix II (a multilateral treaty to protect endangered plants and animals, same as Brazilian Rosewood. So once again I was looking for a solution. 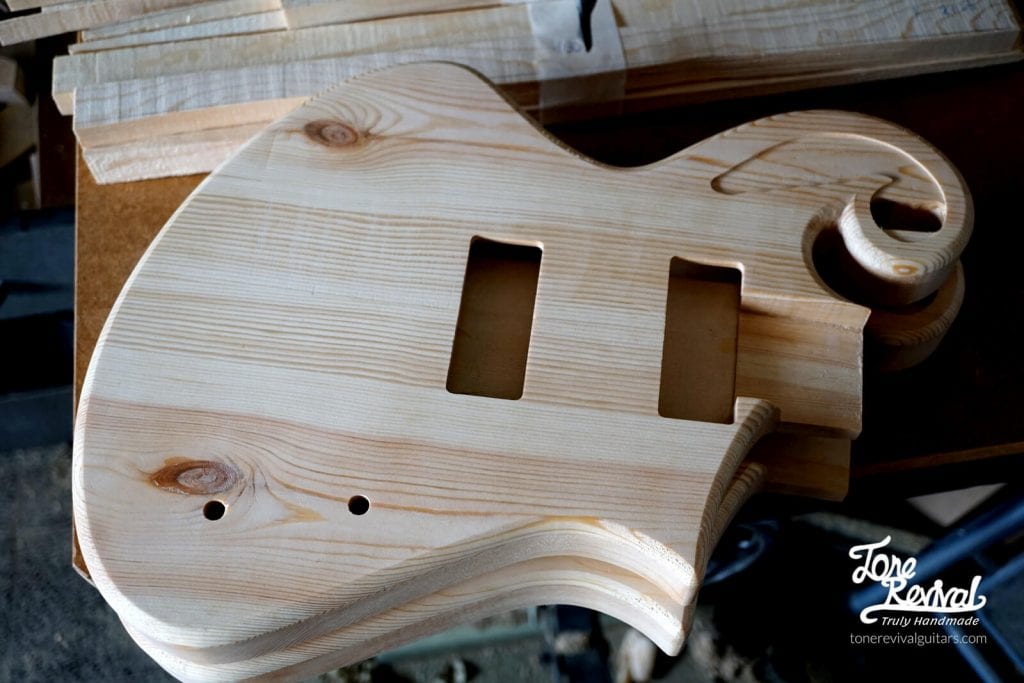 After ruling out various woods, I heard one day a pine guitar demo, and for me the search was over. A few months later I plugged a finished “Spirit of the Wind” guitar, played a few notes, and at that same moment, all those exotic tone woods and the endless debates disappeared. It sounded so warm, with sparkling highs and low bottom and with such projection that I was astounded. 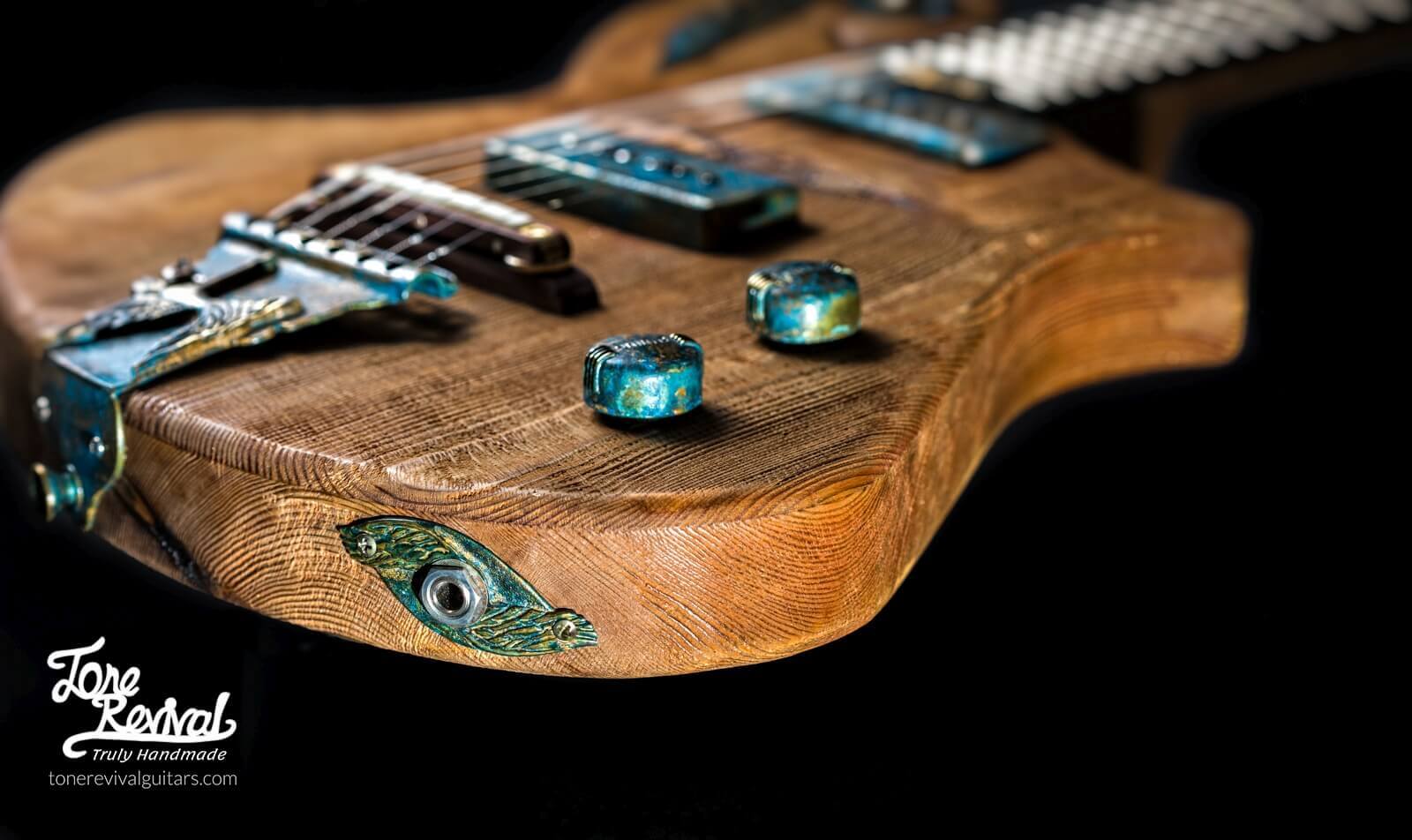 Now, one may legitimately ask why the humble pine was neglected by the guitar industry. Well, the first answer is “industry”. Pine is a little bit difficult to work with, in the first place. Routing and shaping it into complex forms will likely result in tear out (torn wood fibers), and you might find yourself battling to keep its structure intact. For example, we, the guys here at Tone Revival Guitars had to struggle with our 9 VOG amp cabinets. When we came to the construction stage, we discovered that the dry pine lumber that we use for the cabinets warped badly and 30% had huge cracks. Same goes for our “Spirit of the Wind” pine guitar…. 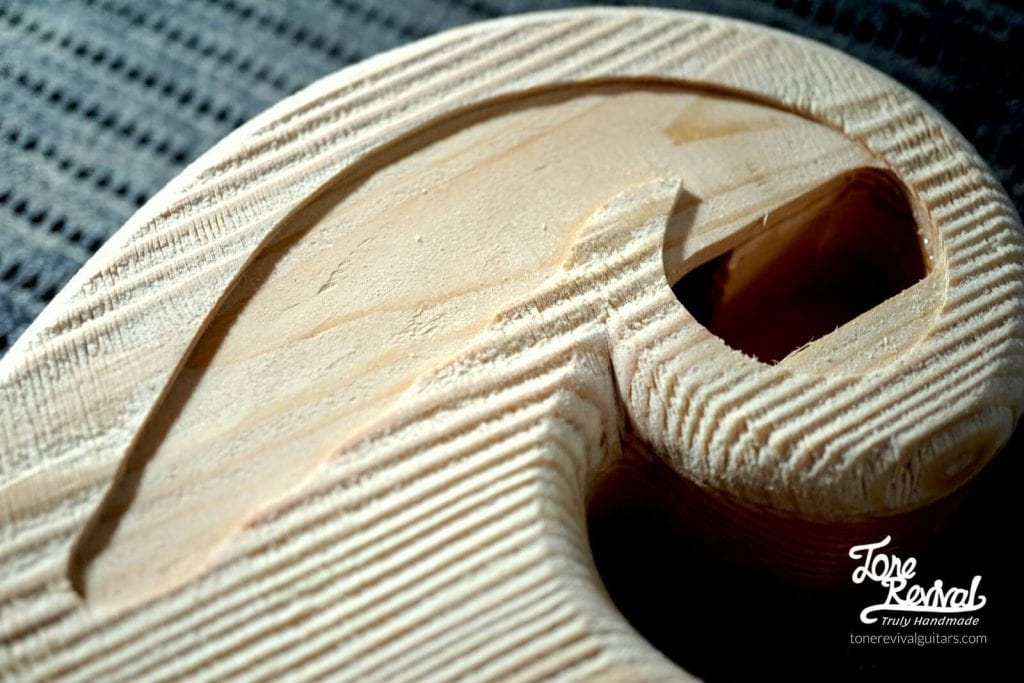 So when a guitar factory has to manufacture 500 guitars per week, they can run into real production problems. That is why you’ll mostly find pine guitars in small workshops and guitar boutiques, such as ours here at “Tone Revival Guitars.”

The reason that we find pine ( and cedar as well) to have such a warm and beautiful tone is its “ability” to vibrate easily. We found that a semi-hollow construction with pine or cedar will bring back the wonderful tonal characteristics of a great acoustic guitar and the bonus is, of course, the super lightweight construction.

So, next time you are looking for an electric with a classic “old school” tone, keep in mind that a pine guitar will actually get you closer to that “holy grail of tone”. 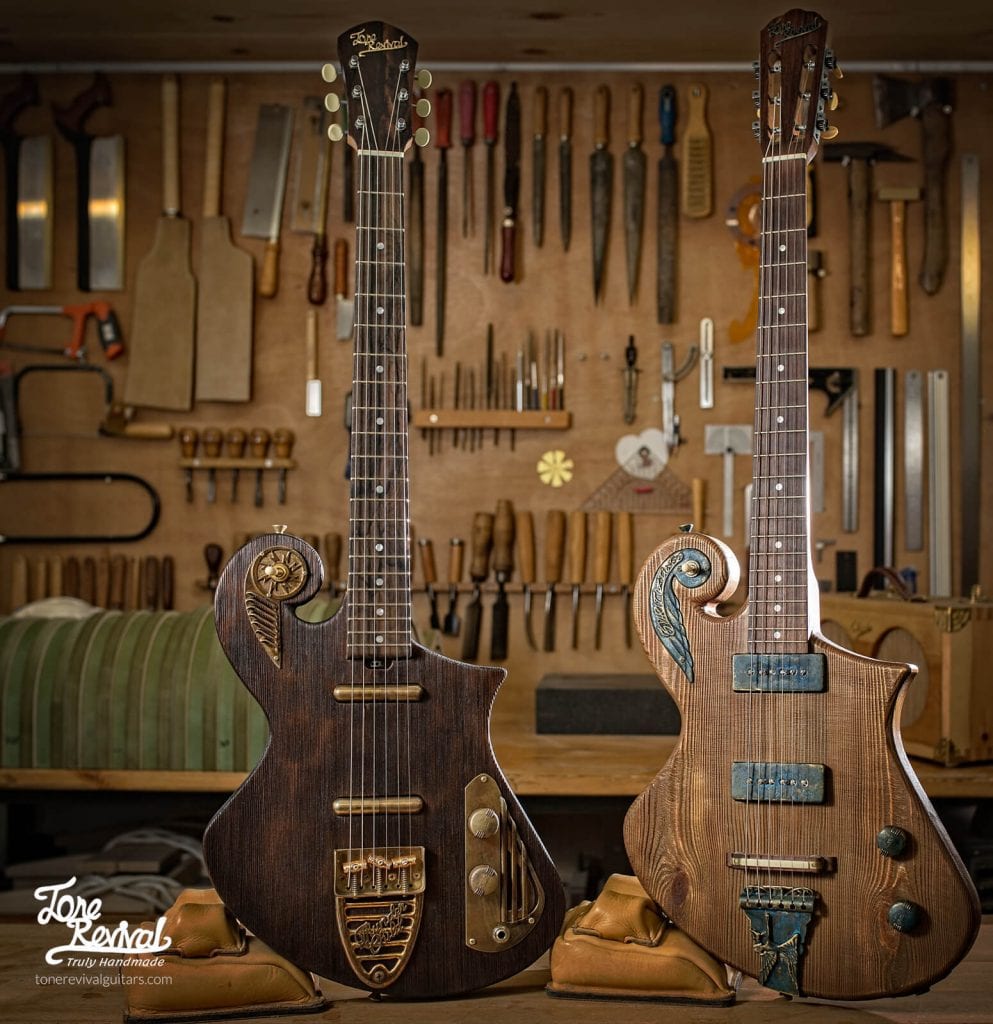 Want to hear more?
Fill in your details and we will get back to you soon!
Contact Us
Contact Us
Scroll to top