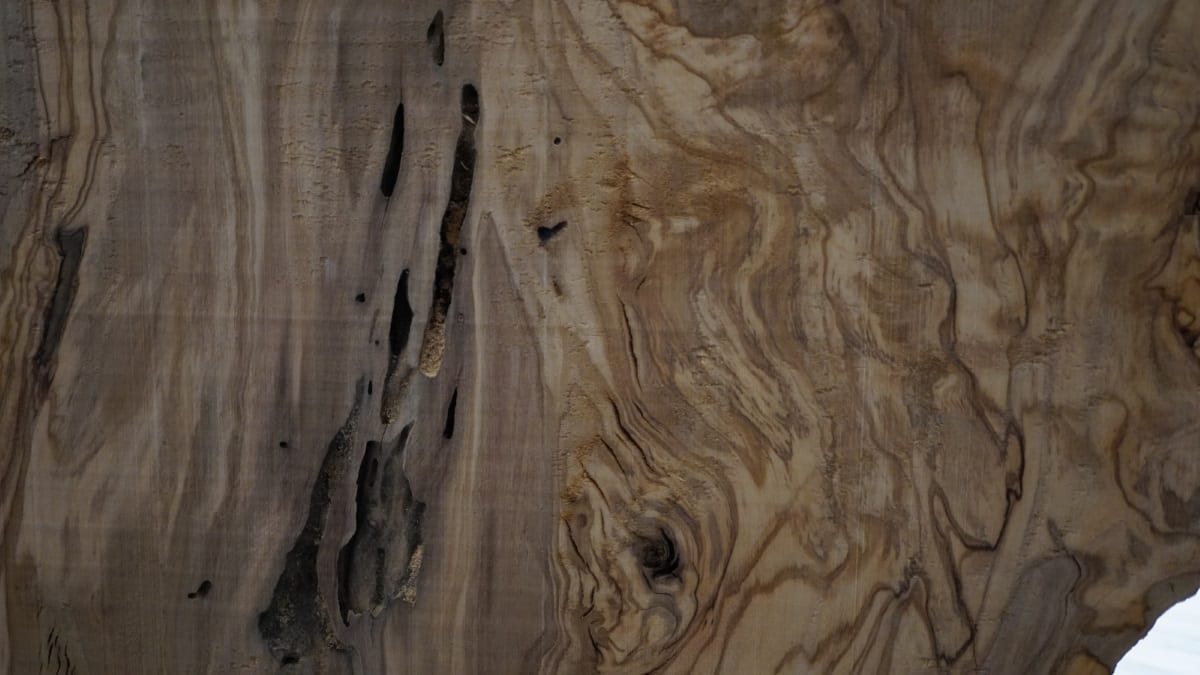 As always I’m looking for unique features to include in our custom guitars. Using aged salvaged local lumber from Israel is one of my favorite parts in designing and crafting these handmade guitars.

I like it for various reasons. The first one is keeping mother earth happy. Deforestation and the exploitation of the resources of nature is literally a crime against humanity.
The second reason is the historical background of the local lumber that was used for the construction of the temple in Jerusalem and was used for building ancient musical instruments.

A few months ago during my annual journey to the Galilee, I couldn’t help but notice the ancient majestic olive trees that were all over the place.
With their huge wrinkled trunks and scarred bark, you can see and feel the centuries of exposure to the elements. Later on, while visiting one of the local wineries, I noticed some slabs of ancient olive lumber. The only thing that I was thinking of was, “Wow, this is an amazing guitar top.”

It actually looked like an altered version of Japanese maple, which is one of the most striking and beautiful lumber in my humble opinion.

A few weeks later, during my “Lumber Hunting” journeys I came across some beautiful chunks of 300y old local, salvaged Mediterranean olive.
Its origin was the ancient city of Hebron, in the Judean mountains. The burial site of the Patriarchs and the Matriarchs.

Symbolically and historically, olive is mentioned in the bible as one of the seven species prevalent in Israel: “a land of wheat and barley, of vines, figs, and pomegranates, a land of olive trees and honey” (Deuteronomy 8:8).

It is, associated with blessings, fertility, and longevity. It is also a symbol of peace because it was carried by the dove to Noah’s ark after the Flood. It became a symbol of spirituality and purity which is attributed to olive oil, and the high priest, the Temple utensils in Jerusalem, and the kings of Judea were anointed with olive oil for a coronation. As a matter of fact the original Hebrew word for “Messiah” -MASHI’AKH is derived from the word “MASHAKH” – rubbed oil (on the new king’s forehead) as a symbol of purity and sovereignty.

There are many famous ancient olive trees here in Israel, such as the ones on the Mount of Olives in Jerusalem, situated in the yard of the Church of All Nations, also known as the Basilica of the Agony, which is at the foot of the southern side of the Mount of Olives in Jerusalem.
These magnificent trees with their twisted, ancient trunks, look like some ancient creature that has been waiting there for all eternity.
Some of these trees are believed to be 2000 y old.

It is very difficult to estimate the age of an olive tree because of the absence of rings.
It’s the size of the trunk that gives us a hint of its age.
That is exactly why a piece of ancient olive lumber looks like a piece of art.
The twists and sporadic growth pattern creates an amazing, colorful
wood-grain pattern.
These ancient pieces will be used for our Spirit of the Wind custom guitar. 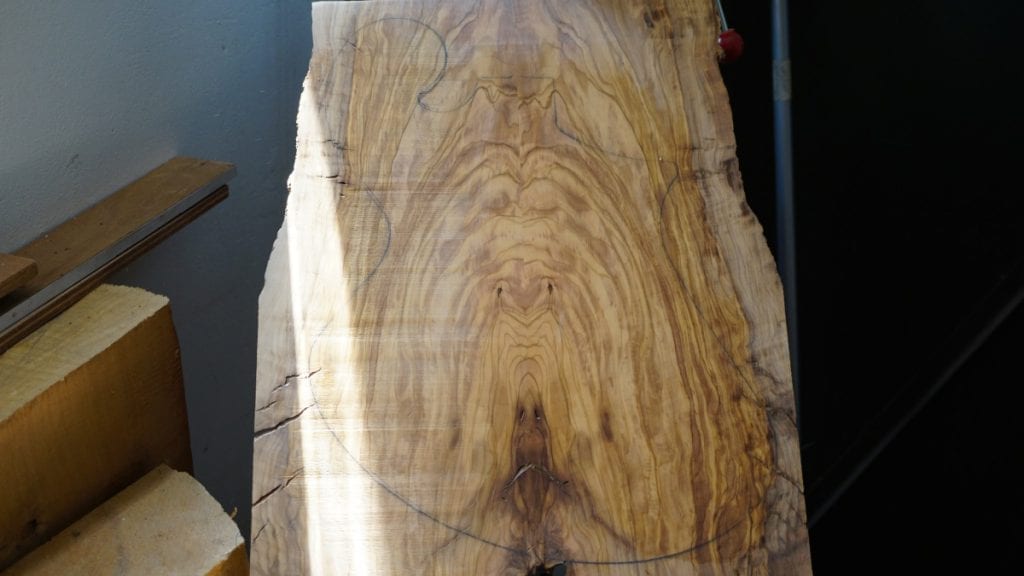 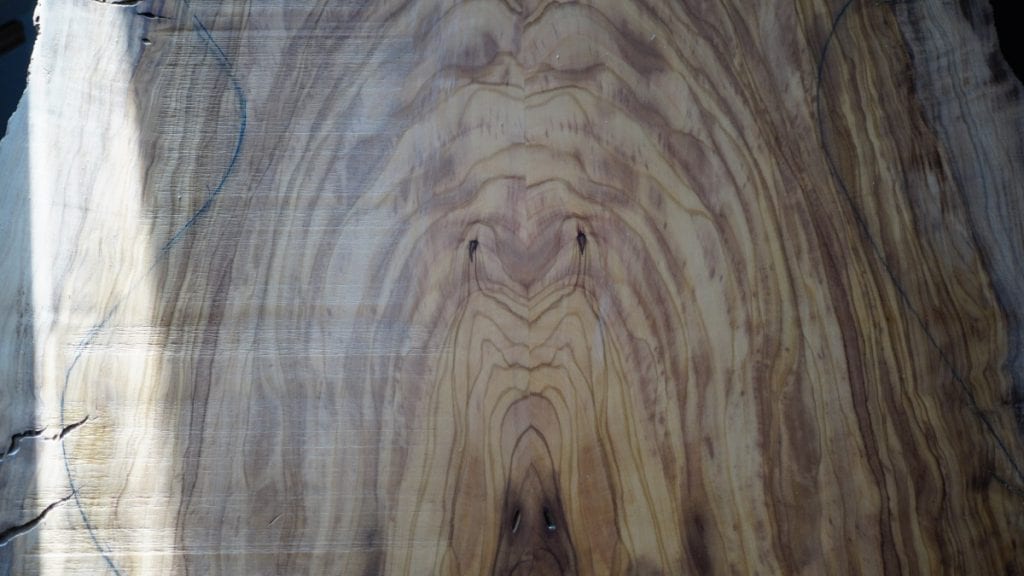 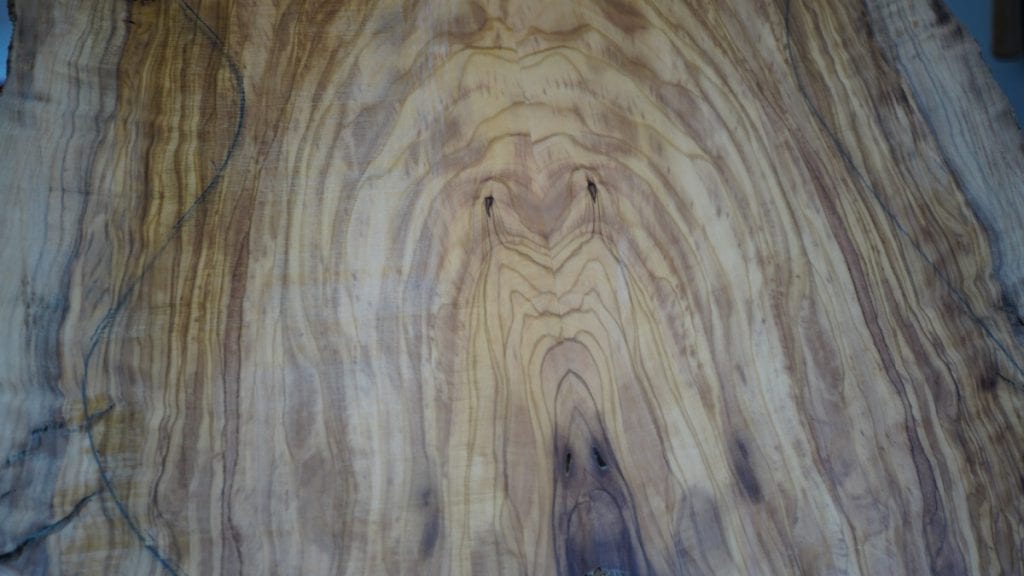