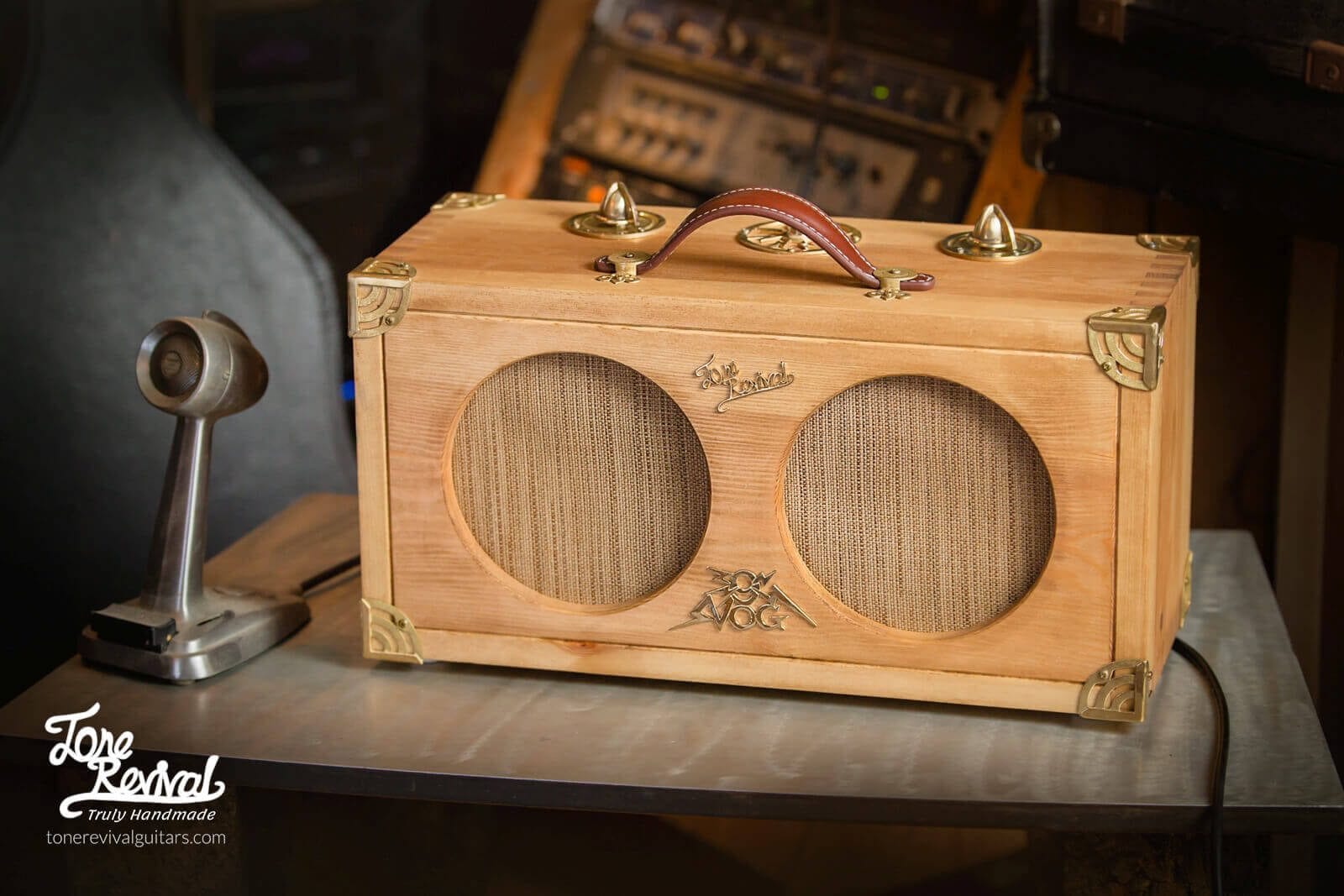 The Magnificent Nine Volts of Glory Boutique Amp. Meet the meanest rock-n-roll and blues beast with its jaw-dropping tone and gorgeous looks.
This boutique guitar amp was inspired by Brian May’s classic “Deacy Amp” Which was May’s secret weapon in creating his sublime guitar tone. Our 9-volt battery powered “Deacy Amp” is a unique combination of the legendary tone of two guitar heroes:
Brian May and his hero and source of “guitar sound” inspiration-Rory Gallagher. 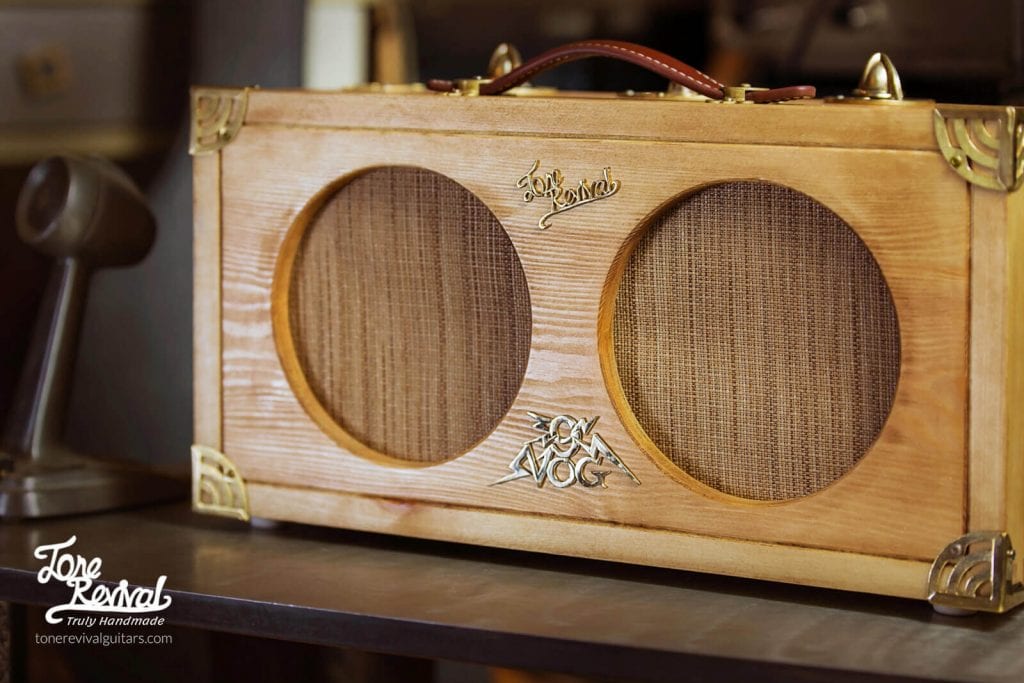 Watch the first ever test done on the 9 VOG boutique amp!

Basically what we did was combining two major factors in creating this little beast. The first one was creating our own Deacy Amp based on our own unique analog circuitry which was designed and hand built by guitar effects guru Guy Shapira. The next thing we did was adding a built-in overdrive/treble booster unit which is an accurate replica of the legendary 1973 S. Hawk Tonal Expander Fuzz/ Overdrive used by Rory Gallagher.
The result is a “Deacy amp” on steroids which enables you to recreate any classic overdriven legendary guitar tone.

The 9 VOG custom guitar amp is much more than a “Deacy Amp” . With our own real analog circuitry, is designed to recreate any classic sound from early electric Chicago blues, through Black Sabbath’s Iommi’s ferocious growl and Page’s early Zeppelin’s small overdriven amps, to Rory Gallagher and Brian May’s soulful tone. Allows you total portability and provides all the fuzz/overdrive you’ll ever need. Gone are the days of lugging around stacks of gear.
Gain structure inspired by the legendary 1973 S. Hawk Tonal Expander Fuzz/ Overdrive used by, among others, Rory Gallagher. Equipped with two 6″ vintage style Alnico speakers.
This little wonder is already being used in many studios as a secret weapon for recreating not just classic guitar tones but also for recreating the beautiful analog sound of late 50’s to early seventies classic sounds.

Can I change the speakers?

While the speakers are a standard 6” size, and it is technically possible, our testing found that the handmade Weber speakers we use sound best with this amp.

Do you have amps in stock?

How long does it take to make and ship my amp?

As these amps are truly hand built, and the Weber speakers are also being custom manufactured for us, it takes between 6-12 weeks from the moment of ordering until shipping the amp.

I want to cancel my order. Will I get a refund?

As long as it’s before we ship the amp, yes. No questions asked.

What if I want to return the amp after I got it?

We offer a 14 day money back guarantee for whatever reason. Once the amp Ships back to us you will get your money back.

What warranty do you offer?

Ours is a one year warranty on all parts materials and workmanship, outside of normal wear.
Damages caused by physical trauma, misuse or neglect are not covered. Also, the warranty does not cover repairs performed by anyone other than Tone Revival.

As a “ferocious” 1 watt amp, we call it the “Wife Negotiator” because it will give you the best organic beautiful overdrive tone without making your ears bleed. Let me put it this way – it’s surprisingly loud but will keep your eardrums intact.

The story of the 9 Vog Amp- nine Volts of Glory

[or: The Wondrous story of nine volts of glory]

Our story begins more than 30 years ago. It was during the mid 80’s. A time when guitar tone became bombastic, Larger than life, with dense distortion and the endless wail of the digital delay. These were the times of metal hair bands, tight leather pants, and over the top racks of digital guitar effects. Dark times indeed.

The dramatic turning point of this story took place during the summer vacation of 87′. The public broadcasting channel, which was the only one available back then, was broadcasting mainly old reruns of American SF series such as the original Star Trek and the Time Tunnel alongside old BBC broadcasts. With their low budget they were forced to buy, what was considered at the time, leftovers.

One of these old shows was the now classic BBC “old grey whistle test” .
I was watching the screen without much expectations as the show started. The presenter of the show introduced the band. The camera focused on the front man. A young guy with a plaid/flannel shirt and a battered strat.

From the first notes I was hooked to the screen. There were no extravagant lights and laser shows. No bombastic stage props and above all just a haunting guitar tone with a natural flavor that was controlled with flawless mastery by the guitar player. Everything felt right, as though an old delta blues master reincarnated on stage with an electric guitar. It was Rory Gallagher.
The search for that haunting guitar tone never left me.

Around the same time I was listening to early Queen records and noticed that the basic guitar tone of Brian May was quite similar to that of Gallagher,  [but] at the time there wasn’t much information about the rig and equipment.

One day, while staring at a backstage photo of Brian May’s rig I noticed something that looked like an old, shabby stereo speaker. What draw my attention was the fact that someone placed a mic in front of it. These were the early 90’s and without the power of the internet, it took me a couple of years to solve the mystery.

It turned out to be the “Deacy Amp”: A small amp that was built in 72′ by Queen’s bassist John Deacon from a used portable radio that was fitted into a shelf speaker cabinet. The small amp was powered by a 9 volt battery and was used in close to 90% of their recordings.

The connection between these two giants occurred when May, as a teenager, saw Rory perform in a small club. After that show he went to see him and asked him how he got his sound. The answer is unknown to us, but it is fair to assume that May was influenced by the basic sound of Gallagher in the creation of his own sound.

It took us almost a year and a half of experimenting, mixing and matching different circuits, cabinets and speakers, and of course, sleepless nights trying to win bids on Ebay, looking for rare vintage components, until it all “clicked”.
We assembled all the parts, attached a 9 volt and plugged in the guitar.
Suddenly I was in my parents’ living room, listening to Rory [aside for the actual guitar player (myself) managing to sound nothing like him…]

But the final proof that we did something right arrived the next day, when I took the amp to the studio. Half way through the session the door burst open, studio manager came looking for the source of the sound. At first I thought that the door was left open and the sound leaked. I apologized, as the amp is surprisingly loud, but he just smiled and said:
“Where did you get this amp and how much does it cost. it’s unbelievable……

image gallery
order
Read the full story
Want to hear more?
Fill in your details and we will get back to you soon!
Contact Us
Contact Us
Scroll to top